There are a lot of people in our lives, ranging from family, friends, and generally forgettable people we interact with but don’t remember   But who amongst the people we know can be considered a real friend?   Who would consider us one? 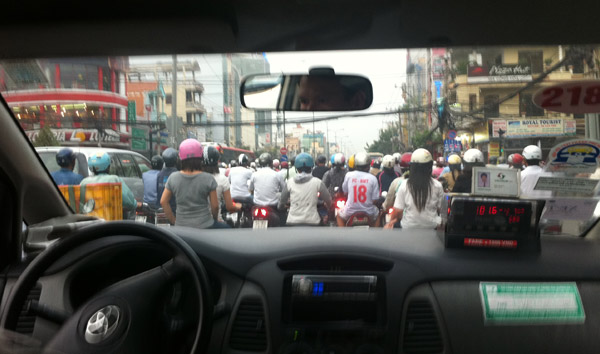 There are a lot of people in our lives, ranging from family, friends, and generally forgettable people we interact with but don’t remember

But who amongst the people we know can be considered a real friend?

Who would consider us one?

Pardon Me, Would You Have Any Grey Poupon?

For example, right now I am in a cab on the way to work, surrounded by an ocean of mopeds, bicycles, and people riding in of cars, all of whom are jostling, honking, and bashing into each other

The traffic in Vietnam is nothing like what it is in the US, there are so many people on the streets of Saigon it is very hard to imagine unless you have seen it

Since I have been here, this has been my daily commute

Despite the multitude of people around me, there isn’t one that knows me, or cares about me, and none of them would stop if the cab flipped over and exploded like a milk truck

Being surrounded by Motorcade Madness, it reminds me of how easy it is to affect the lives of the people around us, even if we don’t them

If I chose to, I could reach out of the cab and wave at someone just to make them smile, I could roll down the window and throw my laptop at someone with the intent of hitting them in the face, or at the next red light I could get right out and hug the person closest to me

These examples sound funny, but they are all completely possible and the only thing stopping me is choice

The Power To Be A Good Friend Is Yours

We are constantly surrounded by people that we call friends, acquaintances, co-workers, and total strangers, and have the ability to impact anyone as much as we choose to

But how often do we go out of our way to be someone who really stands out and affects people around us in a positive way?

Right, that is what I thought

The Reality Of Our Culture

The traffic shenanigans listed above are easy to do, and they also involve total strangers

But how often do we take a break from our busy lives and randomly make one friend really happy in some way or another?

Our culture is not designed in a way that we are taught to consider others, it is almost the total opposite

Me First, But After You Of Course!

For the most part, we learn to think of ourselves first in most of what we do in life, mainly because it is what we learn at home, amongst friends, while at school, work, etc…

Simply put, how many people do you know that consistently think of others first, not many right?

But the real question, is how many times do you think of others first?

Everyone has problems, but when we focus on helping and attending to others, it puts our lives in a very different perspective as it teaches, and reminds, us that the world is bigger than what is going on in our particular piece of it

It Isn’t As Hard As We Think

Other than a very tight group of people, I do not have a lot of friends, but I do my best to do things for them at random times that put smiles on their faces, even if it is just making them laugh or listening to how their day was with sincerity

You don’t have to take a bullet for people, but it is important to let people know how much you care about them by showing how they are special to you in some way or another

The value of those around us
I love her smile, and the fact that she is not a spaz