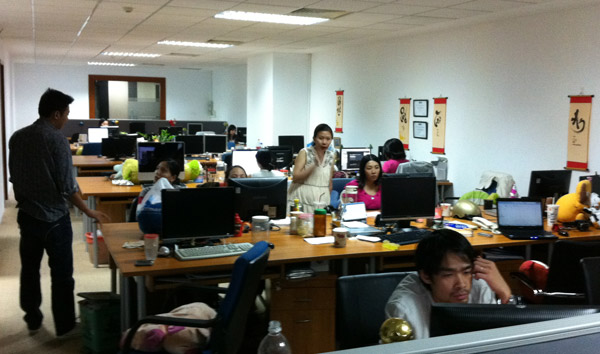 I have been crushing to launch NXTM’s music platform in time for a 3/16 debut at SXSW, and the process has been grueling

My last month has consisted of twenty hour work days, career defining bursts of creativity, fights of all sorts, and sometimes passing out on the floor at the office

Yes, that’s right, sometimes I sleep on the floor at the office

The last time I did it, I slept face down on the floor, but the time before that I slept using my shoes as a pillow

Tonight is another example of how far the team is willing to go to make the project a success as we are working in the office at 9pm on a Friday with no end in sight, and our design lead is eight months pregnant, trucking around giving orders like a boss

Is It Worth It? I Have No Complaints

The reality is, I am making more money and have more freedom than I would working at a “regular” job, but I also have no life outside of work as I have been living in LA and Vietnam for the past year, only setting foot in my house in San Francisco on the occasional weekend

Even though it has been painful being apart from Amy so much over the last six months, I have come to understand that it was for a purpose more valuable than anything those six months could have given

Knowing Me Knowing You, Uh Huhhh…

Random ABBA lyrics aside, when Amy and I first got together we went into the deep end of the pool very quickly because we knew what we had was special

Even on our second date, as it was obvious that we were headed for something amazing, I knew in my heart that my love for her was already starting to blossom, and I even told her so

It just blurted out of my mouth unintentionally, and when I realized I had said that, in the midst of what felt like an eternity of awkwardness, I thought:

I meant it when I said it, but someone can’t just say “I love you” on the second date and not say it without feeling

After I explained that I could feel something very special inside of my heart, and not that I loved her like some delusional sociopath, Amy reciprocated and said that she loved me too

Before everyone explodes into a chorus of either “Ahhh” or “Ewww”, just know that the moment was an amazing, honest, exchange that set the course for the rest of our relationship as it showed we could always be open with each other, no matter what

And while we have been apart, we have used the time to get to know one another intimately by talking about our feelings with total openness

Coming Home Won’t Be Worse Than Being At Work

Even though lately, my work can sometimes be a nightmare beyond all measure, it won’t always be like this, and in a few months, I should be back home, enjoying life as usual

In being back in SF, I will be able to enjoy the simple thing that defines the relationship between Amy and I: total peace and happiness

Our relationship is so natural, so easy, and so honest, I have no concern over whether a fight or argument could break out. Amy is such a good, relaxed person, that we are able to talk through any type of problem as secure, stable minded friends

So I try to do everything possible to preserve the sense of peace that exists between us, because coming home to a quarrel of any kind would just feel awful for either one of us